The ability to distinguish between similar-looking characters and symbols.

It is equivalent to auditory discrimination and it is sometimes weakened in people with dyslexia. It usually develops in preschool age and children are able to use it well by the time they start school, when they learn to read, write and count. A weakened visual discrimination may cause confusion of similar symbols or pictures and thus also confusion of similar letters such as b/d/p, u/n, a/e/o, s/z, etc. It is always some very small detail, which is represented in a different manner or placed on a different side, but it constitutes a significant difference. Similar problems may occur in determining the direction of travel where there is the same arrow, but pointing in another direction, or in identifying similar brands of products in the store, etc. Just like auditory discrimination, visual discrimination can be trained and improved, which is done mainly at primary school when it turns out that the pupil has some troubles in that area. 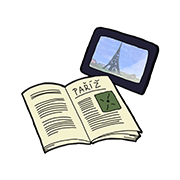 Tip: When learning, use as many different senses as you can! Find the discussed matter as a picture. If it’s possible, touch it, move it, write it down or draw it.