One of the so-called specific learning disabilities, which indicates considerable difficulties in writing skills, in particular in graphical form.

The handwriting of an individual with dysgraphia is usually very illegible; at the beginning of their school education, it took these people a very long time to learn to write, as all the loops and curls in a script caused them difficulties. If they need to quickly record information in writing, it often ends up too clumsy, messy and illegible (sometimes just for the people around them, but sometimes even to the writers themselves).

In adolescence and adulthood, writing is primarily a means to capture information and convey it to others. If the writing is illegible and doesn’t fulfill this function, it is unnecessary to use it. In this case, it is preferable to either change the type of writing – sometimes it is enough when the person in question starts to use block letters instead of cursive, while some were also helped by the transition to the new Comenia Script – or to learn to type quickly and efficiently with all ten fingers on the computer. Freely available programs for typing with all ten fingers can be downloaded from the Internet. In addition, a person with dysgraphia is entitled to adapt their writing at school, so that by mutual agreement they should be allowed to write in block letters or on a computer. 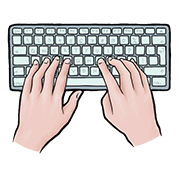 Tip: If you and the people around you can’t read your handwriting, try to write in block letters or learn to type with all ten fingers on a computer.